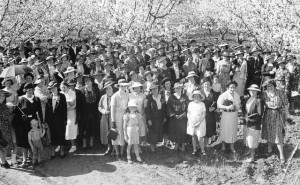 The next meeting of the Orange and District Historical Societyâ€™s History Alive series will focus on Orangeâ€™s very own mountain, Mount Canobolas.

Most people would not be aware that Mount Canobolas was one of the largest volcanos in NSW millions of years ago. At that time, the ancient landscape was covered with a layer of basalt from the volcano and the mountain is one of the few remnant volcanos still in existence (Bathurstâ€™s Mount Panorama is another).

Orange owes much of its horticultural and agricultural success to the legacy of the mountain, including rich basalt soils, a cool climate and relatively high rainfall.
This resulted in intensive settlement, and until recent decades there were hundreds of small orchards, dairies and mixed farms in the area.

Professor Somerville, who grew up on a local orchard, will bring a wealth of knowledge about the geology of the mountain. He has had a life-long interest in geology, during which he built up a huge collection of fossils and minerals from throughout the world.
Much of his collection can be seen at the Australian Fossil and Mineral Museum in Bathurst. He will give an illustrated talk on the geology of the mountain and will bring along rare specimens of rocks from the mountain.

Morrie Dally comes from a Nashdale orcharding family. His grandfather James Dally jumped ship in 1861 and headed to the goldfields at Bendigo. He eventually moved to the Orange district and bought â€˜Tregeagleâ€™, in the Canobolas area, in 1912. Morrie was born at Tregeagle, later moving to â€˜Bryn Gobaithâ€™, and has been an orchardist all his adult life. Morrie has a wealth of knowledge about the orchardists of the Canobolas area.

Everyone is welcome to attend the meeting, and a particularly warm welcome will be given to orchardists from the Canobolas area. The meeting will take place at Orange Senior Citizens Centre (entry from Woolworthâ€™s car park) on Wednesday, July 8 at 7 for 7.30pm. There is a small charge of $3 for members of Orange and District Historical Society and $5 for non-members, to cover costs. Light refreshments will be served.
If you have any inquiries or would like to attend the meeting, please RSVP Phil Stevenson on 0402 412 188, email: ibiswines@bigpond.com

Posted in Orange & District Historical Society and tags: Cherry Blossom Festival, Mt Canobolas, Orchards by Jan Richards Comments Off on Mt Canobolas – The Mountain, the Farms, The People
< Older-post Newer-post > [back to top]