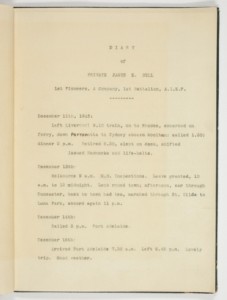 Extraordinary World WarÂ I artefacts including the personal letters of servicemen from Orange – drawn from the State Library of NSWâ€™s renowned collections – are heading to Orange for a special curator talk.

On Thursday 29 October Orange City Library will host a free public talk with the State Libraryâ€™s World War One Curator Elise Edmonds who will talk about the material and share the fascinating story of how the Library acquired its first collection of soldiersâ€™ diaries â€“ this collection was recently inscribed in the UNESCO Australian Memory of the World Register.

Elise will be bringing with her the diaries and other papers of two Orange men, James Elliot Bell and Alexander John McKee.

James Elliot Bell, a carpenter from Orange, enlisted at the age of 24 on 20 August 1915 and embarked from Sydney on board HMAT Mooltan on 11 December 1915. He served as a private with the 1st Battalion, later transferring to the 1st Pioneers A Company, 1st Battalion in Egypt, January to Aprril 1916, and France, April to July 1916. He was wounded in action in France and died at No. 5 General Hospital, Rouen, on 28 July 1916.

Alexander John McKee, a mechanical draughtsman born in Orange, was working on a construction site in the United States when war was declared. He enlisted in Marrickville on 13 June 1916 at the age of 33 and embarked from Sydney on the 14 September 1916 on the HMAT Mashobra A47. He served in France as a Signalman and then later as a Gunner in the Australian Field Artillery (4/5th), Divisional Ammunition Column. He was twice wounded in action in France and returned to Australia on the Raranga on 29 October 1919.

On 11 November 2918 McKee wrote:
This day is one of the greatest in history. It was conveyed to us today as it is the day on which the German emissaries are to sign the Armistice and we were informed that it had been signed: but just at what hour we will later discoverâ€¦

The talk will be held at Orange City Library at 5.30pm on Thursday 29 October. Bookings essential 0263938132 or library@orange.nsw.gov.au