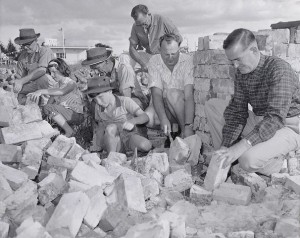 All of the bricks used in the building were second-hand and cleaned by volunteer labour. Photo courtesy Orange and District Historical Society CWD Collection.

On Wednesday 10 June it will be 50 years since the Orange Function Centre, or the Amoco hall as it was then known was officially opened.

The concept of the Amoco Hall was first mentioned at a meeting at the Ophir Motel when Mr Ernest Tilston â€˜soldâ€™ the idea of a public hall to the then Deputy Mayor, Alderman Ron Hill.

Strangely enough the meeting was supposed to discuss the formation of a Bowling Club for proposed bowling greens that the Amoco Oil Company had agreed to help finance in exchange for the lease of the land on which their service station stood. Alderman Hill promised to solicit the support of the Mayor, Alderman Clive Hamer, and if Orange City Council agreed to a a public hall instead of a bowling green an approach would be made to the directors of the Amoco Oil Company to devote their lease money to the construction of the building.

Mayor Hamer and Mr Tilston had little difficulty in persuading Amoco and the Mayor was impressed with the need for a community centre. By this time Mr Tilston had secured the full support of the Orange Sports and Social Club and a not-for-profit company was to be formed to construct the hall. The Club agreed to raise funds and with Mr Tilstonâ€™s enthusiasm support began to roll in. The Orange Sports and Social Club raised money, tradesmen promised their labour and good second- hand material was purchased.

The opening of the Hall on 10 June 1965 soon convinced everyone that this was a much needed amenity. The festivities featured a four day trade fair followed by a seminar on decentralisation, a Cabaret Ball, Stomp City dance and concert. [read more]