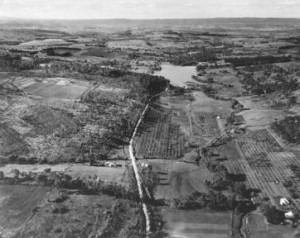 Water, wells, dams, creeks and bores will be the topic of Orange & District Historical Society’s next meeting, to take place on Wednesday, September 14 at Orange Senior Citizens Centre at 7 for 7.30pm.

The development of Orange has always been underpinned by its water supply. The first settlers were faced with only creeks and wells, which could easily become polluted as livestock wandered around unfettered.

In the early days there were no tanks or pipes, and taps were virtually unknown. Roofs could not be used to effectively channel water into tanks until after corrugated iron was invented in the 1860s.

There was no reticulated water supply until Gosling Creek dam opened in 1890. The development of the city’s water supply and sewerage went hand-in-hand with successive crises, including water-borne diseases, leading to the building of bigger dams and refurbished reticulation systems.

Orange stormwater system is the latest innovation in the bid to save precious water supplies. Over the years water has been a major source of employment and expenditure and the city’s water supply remains of major interest as it develops and expands.

Guest speakers at the meeting will be: Marie Hammond, who will talk about the early water supply; Geoff Porter, who has witnessed plenty of nail-biting times during major droughts when he worked for Orange City Council, who will talk about water for a growing city; Maurie Maher, owner of Central West Water Drillers, who is also a water diviner, will talk on the importance of water bores, the development water drilling rigs and will mention some of the colourful characters who used divining as a method of locating underground water; and Peter Brown, who is a member of Orange Model Engineers Club with a keen interest in old machinery. The club is currently restoring the Hornsby Stockport engine, once run on producer gas, at the Lake Canobolas pump house.

The meeting will start at 7 for 7.30pm. There is a small charge of $3 for members of Orange and District Historical Society and $5 for non-members, to cover costs. Light refreshments will be served.If you have any inquiries or would like to attend the meeting, please RSVP to Phil Stevenson on 6362-3257, mobile 0402 412 188 or email ibiswines@bigpond.com

Posted in Local History, Local Sites Comments Off on Water, wells, dams, creeks and bores
< Older-post Newer-post > [back to top]