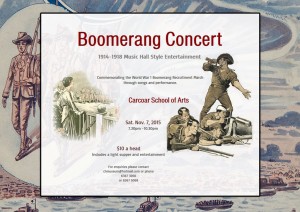 A re-enactment of the World War I Boomerangs recruiting MarchÂ will take place on 31 October throughout towns across the state includingÂ Canowindra in a celebration of the volunteer values whichÂ have been epitomised in the ANZAC Spirit.

This re-enactment will commence and finish a few months earlierÂ than the historically correct dates but the route will still pass throughÂ most of the communities visited on the original march. ParticipantsÂ will travel from Bathurst to Sydney and join with participants of sixÂ other recruiting march re-enactments to attend the RemembranceÂ Day service in Martin Place.

Organisers of the march are seeking out representatives fromÂ Canowindra to be the townâ€™s mascot in the march.Â â€œWe want all the towns to own it,â€ said Cooee March Secretary KimÂ Templeton. â€œItâ€™s your history as much as anyone elseâ€™s.â€Â Contact Kim on 0447 447 458 for further information.

Posted in World War I and tags: Boomerang Recruiting March, Canowindra, World War I by Jan Richards Comments Off on 2015 Boomerang March
< Older-post Newer-post > [back to top]