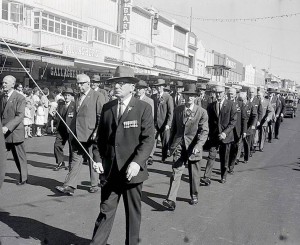 Despite the fact that most of the action during World WarÂ I occurred on the other side of the world, there was hardly an Australian family that was not affected by it.
In the Orange district, a significant number of men volunteered for military service while local doctors and nurses also spent time serving in New Guinea, Egypt, the Dardanelles and the Western Front.

Orange & District Historical Society is focusing on World WarÂ I at its next History Alive meeting on Wednesday, August 26 to mark the 100th anniversary this month of the outbreak of the war.

The society is delighted to welcome two excellent guest speakers: Orange City Library researcher Trudi Mayfield and author Michael Caulfield. Trudi Mayfield has been researching the stories of Orange district men and women who volunteered for service during WWl. The results of her research so far can be seen on Orange City Libraryâ€™s blog, which includes commentary on the course of the war as well as many stories of individuals who served during the war. Her talk will be illustrated with images from her research.

Writer, TV and film producer and director Michael Caulfield will be known to many Orange residents for his book â€˜The Unknown Anzacsâ€™, which was published late last year.Â  The book takes readers through the course of the war using previously unpublished diaries of those who served. The result is a gripping account of how the war affected those at the front. Copies of Michaelâ€™s book will be available for sale during the evening, courtesy of Collins Books.

The society will also have some items of interest on display, including a large framed photograph of an Australian military band marching through the ruins of Bapaume.
Members of the public are welcome to attend, and the society particularly welcomes members of the RSL and the descendants of local people who fought during WWl.
There will be time for questions and answers.

The meeting will take place at Orange Senior Citizens Centre (entry from Woolworths car park) on Wednesday, August 26 at 7 for 7.30pm. There is a small charge of $3 for members of Orange and District Historical Society and $5 for non-members, to cover costs. Light refreshments will be served.

If you have any inquiries or would like to attend the meeting, please RSVP Liz Edwards on 6362-8647 (email: liz.edwards@orangepeel.it) or Phil Stevenson on 0402 412 188 (email: ibiswines@bigpond.com).

As an adjunct to the meeting, a visit will be made to the Memorial Hall Museum in Anson Street, adjacent to the Ex-Services Club, on Friday, August 29 from 11am â€“ all are welcome.

Posted in Orange & District Historical Society, War, World War I Comments Off on World War I Remembered
< Older-post Newer-post > [back to top]