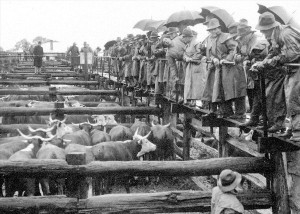 Life on the land was ever a gamble, and not just for those at the coal face but also for the supportive andÂ  dependentÂ  downstream industries – suppliers of hardware seeds and chemicals, transport, processing, marketing and finance just to name a few. In the early days of settlement needs were few but rapidly grew asÂ  properties developed and became more intensive.

The AML&FCo was there from the early days,1863 in London to be precise , and its progenitors the Clyde Company and Gibbs, Ronald and Co. earlier still in 1836 and 1853. They shared the risks of the pastoralists in making choices that would be drastically affected by good seasons and bad ,droughtsÂ  bushfires and floods, and the vagaries of politics and the markets. Theirs is the story of a company sticking it out through thick and thin, making much in the good times and like their clients hanging on by their fingernails ,often for years on end, in he bad.

They began as basically a finance and wool consignment,(to England),Â  company to the early pastoralists, hence the earlier name of the Australian LandÂ  Mortgage and Finance company but ventured much more into property ownership, merchandising ,and he wool broking and stock agencyÂ  business. In 1910 they changed the “Mortgage to “Mercantile” .They ranÂ  a number of very large pastoral holdings and even ventured into Argentina in 1915. Their vast groupÂ  of enterprises employed over 1100Â  loyal people in 1963.

Their history offers a fascinating insight onto the development of the rural sector in australlia.with all its triumphs and vicissitudes, successes, failures, heartbreaks.Â  It is a very human story of a very ethical company and none is better equipped to tell it than Michael Le Couteur,(son of George LeCouteur Managing director up to 1979), who has been researching and collecting material for a sequel to the 1963 Centenary book.Â  2013 represents the 150th anniversary of its foundation.

Michael will be hosting an extensive display in he main pavilion atÂ  the Australian National field days and will speak upstairs at the Parkview hotel on Thursday 24th of October at 7 for 7.30 pm. At both events he will be assisted and hosted by the Orange and District Historical society and The Marsden History Research Centre. For further information call Michael on 0414 327 524Â Â  email mlec4d@gmail.com ,Russell Moor 6361 4745, or Phil Stevenson on 0402 188 email ibiswines @bigpond.com