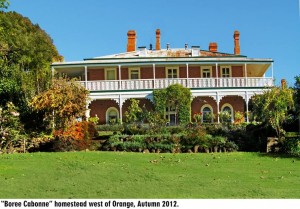 Most people will know of the Boree Cabonne mansion just before the Mitchell monument on the way to Cudal, Manildra and Forbes. Sadly, the house and property are now up for sale after 157 years and sixÂ  generations of occupation by the same family. It is to be hoped that the new owners will be able to give it the same tender loving care as has been given over the years by the Smiths, Mac Smiths and McGeochs.

Claims over land in this area by WC Wentworth and Captain Thomas Raine go back to the 1820s, well before Orange was even thought of. Ownership has passed through the hands of the Hood FamilyÂ  before it came into the possession of John Smith and his descendants from 1847.

Next Wednesday Orange and District Historical Society will hold a History Alive meeting to highlight the wonderful history of the Boree run, and in particular Boree Cabonne. This in so many ways tells the story of land claims and settlement in the Central West, giving us the pattern of land ownership that we now have.
We have three excellent speakers for the night:

The meeting will take place at Orange Senior Citizens Centre (entry from Woolworths car park) on Wednesday, February 12 at 7 for 7.30pm. There is a small charge of $3 for members of Orange and District Historical Society and $5 for non-members, to cover costs. Light refreshments will be served.

Posted in Local History, Orange & District Historical Society and tags: Boree Cabonne by Jan Richards Comments Off on The” Run” the History,the Mansion the legacy
< Older-post Newer-post > [back to top]