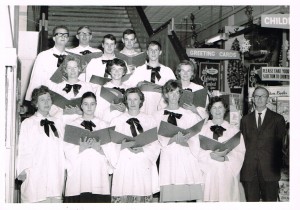 The next meeting of the Orange and District Historical Society’s History Alive series will be on the Western Stores and will take place at the senior Citizens centre next Wednesday evening 8th October at 7 for 7.30pm.

The Western stores had its beginnings in 1849 when James Dalton Junior erected his first building, a slab and bark hut on the present Myers site in 1849. He was joined by his brother Edward in 1858 and they erected their first brick building. They traded as Dalton brothers and continued with many substantial additions over 70 years until they merged and became Western Stores and Edgleys limited in 1928. In 1962 they merged with Farmer Brothers and Myer and traded as The Western stores – A Myer Store. Another name change took place in 1994 to Grace Brothers but it reverted to Myers in 1996. The store continues to trade under that name to this day.

Probably over a thousand people alive today have worked or still work there and there will no doubt be a good contingent on the night to give of their experiences from the floor. Thanks to Carol Thornberry we have the above photo and the names of all 160 staff members appearing in a wonderful staff photo taken in 1966 which will be on display (below).

We have two very good speakers in Merv Wilke and Ross Maroney, both well known in Orange. Merv Wilke had 30 years at the store beginning during the War years in 1943 as a junior and going through to 1973. He worked mainly in the furniture and floor coverings sections. Ross Maroney is a very long term member of the Society who began teaching history and languages at the High School in 1965. He has a long term passion for Orange history and his research forms the basis of a good part of the Society’s information files.

Members of the society, as well as the general public, are invited to attend and comments and questions from the audience are welcome.

The meeting will take place at Orange Senior Citizens Centre (entry from Woolworthâ€™s car park) at 7 for 7.30pm. There is a small charge of $3 for members of Orange and District Historical Society and $5 for non-members, to cover costs. Light refreshments will be served.

If you have any inquiries or would like to attend the meeting, please RSVP Phil Stevenson on 0402 412 188, email: ibiswines@bigpond.com or David Sykes on 6362-1682, email: djsykes@bigpond.com