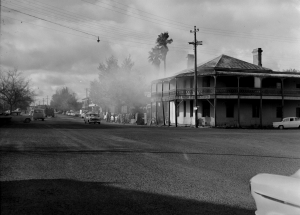 A fire in a former hotel on the corner of Byng Street and Lords Place in May 1963. The site is now occupied by the Civic Centre

The Orange district has had its fair share of fires over the years, from house fires to business premises and bush fires. Before the cityâ€™s first Fire Brigade was formed in 1870 many houses and commercial buildings were constructed of wood, a fire could destroy a whole block very quickly.

The first fire engine was a primitive vehicle by todayâ€™s standards, with firemen working a manual pump on either side.Â This was soon replaced by a horse-drawn vehicle until a motor engine was purchased in about 1919.Â Orange Fire Brigade regularly took part in competitions and the current brigadeâ€™s collection of trophies is testament to its success over many years.

The Fire Brigade will be the subject of Orange & District Historical Societyâ€™s next History Alive meeting, to be held on Wednesday 12 July.Â Guest speakers will be the current station officer Matt Jeffery, and Peter Fuge, who has had a long association with the Fire Brigade and has been working on the restoration of an historic fire engine.

There will also be photos on display of the Fire Brigade and notable local fires.
The meeting will take place at 6.30 for 7pm at the Senior Citizens Centre (entry from Woolworths car park). Supper will be served afterwards.

Members of the public are warmly invited to attend as well as members of the society. A special welcome will be given to anyone who has a current or former connection with the Fire Brigade. Entry is $4 for members and $6 for non-members.

There will also be a visit to the Fire Station at 2pm on Saturday 22 July with a gold coin entry. Numbers will be restricted for the visit so please book ahead.Â For bookings and information please contact Liz Edwards on 6362 8647 or Phil Stevenson on 0402 412 188.