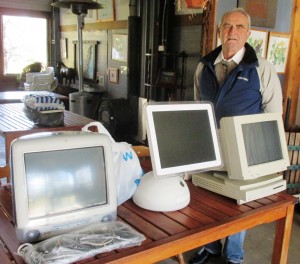 Love them or hate them, computers are with us and impinge on almost all aspects of our lives. Only 50 years ago they were the preserve of white-coated demigods in air- conditioned and air-locked computer mainframe centres. Now we can carry in our pockets devices with equal capacity in the form of mobile phones and tablets. All this has been made possible by advances in technology that enable the manipulation of coded inputs at close to lightning speed and minimal cost.

Computers and technology will be the subject of Orange and District Historical Societyâ€™s next History Alive meeting, on Wednesday, September 10. Guest speakers will deal largely with a time when the applications and operation of computers could be more easily understood.

Brian Newton will lead with a story that starts when he answered an advertisement placed by a service bureau owned by Rand Mines Ltd in a paper in Salisbury, Rhodesia (as they then were),Â  for people interested in becoming computer programmers. He was a teacher of English and history at the time and programming was all a matter of learning on the job. Using a now defunct brand of computer, the Leo 3, his group managed to do the payroll and associated accounting for 150,000 workers on the South African goldfields. Brian joined SPL in Johannesburg in 1978 and moved on with the same company inÂ  Australia in 1984. He went on to direct major projects for ASIC and the Reserve Bank.

Second will be Dr Peter Bilenkij well known to many of you in Orange as a specialist UrologistÂ  who was an early adopter of computing in medical practice.Â  He began with a Tandy TRS80 but soon switched to the revolutionary Apple computers to which he remains a loyal user today.

Finally we shall have Robbie Scott, also well known to students and staff of Orange Agricultural College/CSU. Robbie took on a franchise for Farmplan from an English company and remains at the pointy end of computing to this day with Farmplan and works for Phocas, whose global headquarters is in Orange. An interesting collection of old computers, including one in the societyâ€™s collection which must surely have the tiniest screen ever, will be on display. Members of the society, as well as the general public, are invited to attend and comments and questions from the audience are welcome.

The meeting will take place at Orange Senior Citizens Centre (entry from Woolworthâ€™s car park) at 7 for 7.30pm. There is a small charge of $3 for members of Orange and District Historical Society and $5 for non-members, to cover costs. Light refreshments will be served. If you have any inquiries or would like to attend the meeting, please RSVP Phil Stevenson on 0402 412 188 ,email: ibiswines@bigpond.com or David Sykes on 6362-1682, email: djsykes@bigpond.com 140904